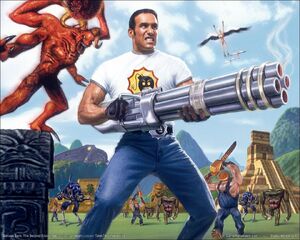 Sam "Serious" Stone is a special forces veteran who is sent back in time to ancient Egypt using alien technology hailing from the planet Sirius, the TimeLock in order to fight the evil incarnation of the ancient immortals, Notorious Mental.

In ancient times, Earth was involved in a conflict between Mental and the Sirians, an alien race that left many of its artifacts to be found by humanity. In the 22nd century Mental's forces return to Earth hell-bent on eradicating humankind: as a last resort the usage of the "Time Lock" is decided: this Sirian device can send back through time a single individual who can, hopefully, defeat Mental and alter the course of history. Because of his bravery in fighting the monsters, Sam "Serious" Stone is chosen to use the "Time Lock". As the game opens, Sam appears in ancient Egypt: his travels from one Egyptian monument to the next, all the way fighting against the monsters Mental sent after him, make up most of the story of The First Encounter. During his wandering, Sam is able to activate a hidden Sirian communicator, located in Luxor, that summons to Earth a starship from the depths of space. Sam goes to the Great Pyramid for a rendezvous with the ship and, after a titanic battle against Mental's general Ugh Zan III, he is whisked on-board the Sirian starship.

The Second Encounter starts right where the previous chapter left off, with Sam travelling to Sirius on the starship. Unfortunately Sam's vehicle is accidentally hit by the "Croteam crate-bus" and plummets down to Earth's surface. Serious Sam crash lands in Central America in the Mayan age. However not all is lost, since the Sirians left a back-up ship on Earth. Since this vehicle is located in a different age from the one Sam finds himself, the hero has to uncover the locations of a number of Sirian time-gates that will help him reach his destination. With this objective Sam storms through Mesoamerica, then travels to Mesopotamia and finally to medieval Europe where the starship is located. On his way, Sam battles two of Mental's timelock guardians: the spirit named Kukulkan the Wind God and a biomechanical creature, the Exotech Larva. Finally, in front of the Cathedral of Holy Blood, Sam confronts Mordekai The Summoner, the last obstacle to overcome on his path to the Holy Grail. After a time-consuming battle with Mordekai's minions, The Summoner is finally silenced forever. In the cathedral, Sam lifts the Holy Grail, followed by his confession of his sins in a booth... to Mental, during which he reassures Mental that "he's coming to get him." thumb|300px|right

Sam going back in time again as a group of people studying ancient civilizations in the Earth's past encounters new forces of Mental hybrid army. Sam has to return to Egypt first, and then proceed to Rome, battling hordes of enemies on his way. Sam encounters fearsome bosses (each one encountered at the end of two settings) two similar-looking lychantroph-like commanders: Sirian Sphinx (Egypt) and Wolfiator (Rome). With the defeat of the later, Sam Stone, again victorious, finally returns back to his time.

The Next Encounter Edit

Sam Stone steps into a time machine which teleports him into ancient Rome where large groups of Mental's forces are waiting. Sam confronts not only the armies of his enemy, but also the Mini Sam, an evil being created by Mental. The story takes Sam through three different settings of Earth's past: Ancient Rome, Feudal China and long lost Atlantis where Sam, as usual, has to wipe out the hybrid army of his nemesis and save the timeline from corruption. On his way through Rome and China, Sam defeats other two Mental's timelock guardians: the gigantic beast Diablotaur and the monstrous Subterranean Emperor Hydra. The journey culminates on board of a Sirian mothership, where Sam has to battle the Sirian Dark Lord, a soul of a great Sirian warrior infused with giant robotic body.

Sam "Serious" Stone, continuing on his goal to defeat his nemesis, Mental. His new missionbegins with Serious Sam being summoned before the Sirian Great Council, where the council asks Sam to defeat Mental and provides him with guidance on how to accomplish this feat. The council reveals to Sam that he must collect five pieces of an ancient medallion, each held by various groups on five different planets, and states that once Sam has the entire medallion, Mental will be vulnerable. All the planets (except Kleer) are populated by friendly, big headed humanoids. The problem is that all the planets are under Mental's control. Sam has to visit five planets in order to recreate the medallion.

With the medallion, Sam Stone is ready to begin the final assault against the greatest enemy of humanity, Notorious Mental, who is located on Sirius, once the planet of great civilization that visited Earth many times, now - the lair of Mental. But in order to gain access to Sirius, Sam is asked to storm Kronor, a moon orbiting Sirius that has a giant weapon which could be used to remove Sirius' protecting field. And so, Sam's journey continues.

In the ending, Sam ventures into the Mental Institution and enters Mental's throne room. The lights are off and while Mental tried to reveal that he is Sam's father the hero didn't listen and started to shoot. Soon, the light is back, and it's revealed that Mental is not here and it was just a speaker attached to Mental's throne thumb|300px|right

Retrieved from "https://theserioussam.fandom.com/wiki/Sam_Stone?oldid=3965"
Community content is available under CC-BY-SA unless otherwise noted.